Natural capital and conservation – can valuing nature save the planet?

Nature is fundamental to human life, underpinning our wellbeing, our economies, and our very survival.  Nature also has enormous value in its own right of course, beyond the goods and services it provides.  Indeed historically, this intrinsic value of nature has been the main focus of the conservation movement’s efforts to convince others of the importance of protecting nature.  But focusing predominantly on nature’s intrinsic value has not worked; numerous indicators show that environmental degradation has continued apace.  We need to be convincing a wider set of people about the importance of protecting and investing in nature, particularly powerful decision makers in government and business who are focused on delivering income growth and economic prosperity.

To do that we need to show the people-centred economic case for protecting and investing in nature – which is strong and growing, and which the natural capital approach can enable us to do much more powerfully.  By promoting this wider understanding of how human society depends on nature for our wellbeing and prosperity, and that we ourselves pay the price when we destroy nature, we hope to generate a step change in environmental governance, and to promote truly sustainable models of economic development.

At WWF we have been utilising this kind of evidence in many different ways.  To give a flavour here’s a summary of some of our latest natural capital related initiatives from the UK and around the world:

In September, WWF-UK published a report on a new approach we have developed called ‘Natural Capital Stress Testing’, which analyses the potential macroeconomic costs to the UK of future natural capital depletion scenarios, in terms of GDP and jobs.  This tested an innovative methodology – developed in collaboration with stakeholders from government and business - using economic modelling techniques to analyse a number of plausible but adverse scenarios (based on the evidence) for future environmental trends.  For example, one scenario looked at the impact of a reduction in agricultural output due to a combination of environmental risks occurring in 2050 and found that this could potentially generate a reduction of £29.5bn – nearly 1% of GDP - that year, and potentially the loss of 347,000 jobs, hitting agriculture and food production sectors worst, but also with significant knock-on effects on the catering and hospitality industries.  These kinds of findings can potentially mobilise a wide set of stakeholders to support improved natural capital management.   We’ll be presenting on the results of this study at the World Forum. 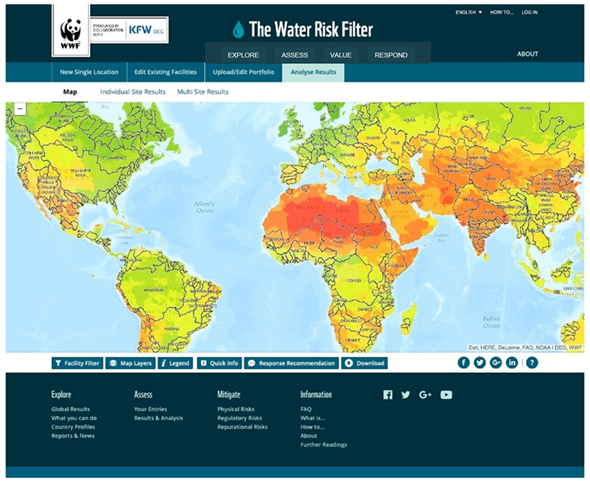 Natural capital analysis can also be used to inform specific development and infrastructure decisions.  For example, in Myanmar, WWF will soon publish a report on the potential impact on natural capital, of planned new roads that are being developed as part of China’s new ‘Belt & Road Initiative’ (BRI), a major programme of Chinese investment in infrastructure taking place in many countries globally.  The study points to specific locations where there are significant risks from road development, and makes recommendations about how development plans should take account of natural capital, in the design and location of new infrastructure.  WWF is also working with the Chinese government to try and build sustainability principles into all the infrastructure development programmes being financed under the BRI, and will make the case for this using evidence on the risks and opportunities it generates for both investors and local communities.

WWF has also developed tools such as the Water Risk Filter which helps companies and investors (over 3000 to date) to assess and manage water risks, such as flooding or drought, that often stem from a loss of natural capital. Starting in January, the Filter will also include a layer that explicitly evaluates loss of natural capital as well as a framework to value water. Through such tools, WWF is helping to translate risk and natural capital into on-the-ground action.
Natural capital can also form a key plank in a broader ‘Green Economy’ strategy for development.  The Government of Mozambique, WWF and the African Development Bank will be launching a new Natural Capital Program in March 2018, which aims to harness ‘ecological infrastructure’ such as ocean-, water- and energy-resources, and align it with built-infrastructure investments, in order to promote increased productivity and climate resilience, and to access new sources of green finance for investment in natural capital. This is a keystone Government initiative to deliver on Mozambique’s Green Economy vision to become an “inclusive middle income country by 2030, based on…rational use of natural capital…to guarantee development…within planetary limits.”

Natural capital arguments can also be used to make the case directly for species conservation.  Flagship species, such as wild tigers, are valued for their important role in maintaining the balance of ecosystems. Ecosystems that also yield many benefits to humans, including providing fresh water for millions of people, mitigating climate change by absorbing millions of tonnes of carbon, and reducing the impact and risks of natural disasters to human lives and property.  Yet tigers have lost over 95% of their range over the last century. To demonstrate the interdependence between species such as tigers, nature and the ecosystem services we rely on to survive, a new WWF report due to be released this month will build the case for investing in the protection and restoration of tiger habitats, from tropical jungle to snowy mountains, and for affirming the Tx2 goal, a global commitment to double wild tigers by 2022  - the next Chinese Year of the Tiger.

A natural capital approach is not a silver bullet, nor a panacea.  It is impossible to fully quantify the value of nature including its intrinsic value, and the importance of hard-to-quantify aspects like biodiversity must not be overlooked.  However, systematically incorporating the value of nature into economic decisionmaking could really transform the way that nature is managed, helping us to meet our conservation goals, and avoid further risks and costs to our own wellbeing and prosperity, caused by its destruction.

Karen Ellis is Chief Advisor on Economics and Development at WWF UK, where she leads a cross-organisational programme of work on natural capital. She will be presenting the WWF Natural Capital Stress test in session D2 of the World Forum on the 27 November.