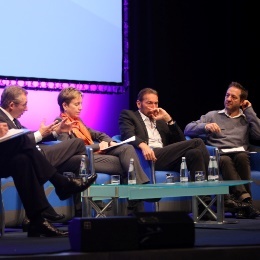 100 days sounds like a lot, but believe it or not that’s how long it's been since 500 people from 35 countries gathered in Edinburgh for the inaugural World Forum on Natural Capital. One of the main aims of the World Forum was to move the debate on natural capital forward to action and today we take a look at the exciting developments that have taken place across the world in the past 100 days.

Just this week at The Economist’s World Ocean Summit, attended by influential global figures including the US Secretary of State John Kerry, natural capital has been a prominent theme. This reflects the fact that natural capital accounting is gaining prominence across international organisations from the private, public and voluntary sectors. Indeed Christine Lagarde used her recent Dimbleby Lecture to say that pricing environmental damage correctly is essential “Because it will help to reduce the harm today and spur investment”.

The end of last month saw the launch of the Natural Capital Business Hub a collaborative project between the Corporate Eco Forum and The Nature Conservancy, supported by the Natural Capital Coalition (formerly the TEEB for Business Coalition), in consultation with a vast array of business and NGO leaders. The Hub builds on the success of The New Business Imperative-Valuing Natural Capital, a collective statement from 24 leading companies that investments in natural capital can reduce risks and costs, fuel growth, and build brand.

Currently, more than 40 leading companies, representing over $1.4 trillion in combined revenues, are featured on the Business Hub including Coca Cola, Microsoft, Disney, Shell, Kimberly-Clark and General Motors along with more than 15 opportunities for collaboration. In January Microsoft identified ‘Finding New ways to measure Natural Capital’ amongst its five sustainability predictions for 2014. To get an impression of the scale of organisations involved consider that many of the companies involved in the Hub also feature on another list, Forbes’ ‘World’s Biggest Public Companies’.

Another exciting development since the World Forum has been The Natural Capital Leaders Index released in January as part of the Green Biz & Trucost ‘The State of Green Business 2014’ report. The Index is designed to recognize companies demonstrating natural capital leadership – and in addition, break new ground by identifying those companies that are truly 'moving the needle' by decoupling growth from natural capital impact.

Alongside the Index, responsible management of natural capital is coming out as the basis for awards, it features as a category in the Guardian Sustainable Business Awards and is the theme for the Global Leadership Award in Sustainable Apparel (GLASA). the shortlist for GLASA includes the Kering Group (Puma’s parent company) and the Natural Capital Coalition both of whom played an important role at the World Forum.

In February Novo Nordisk became the first pharmaceutical company to publish an Environmental Profit & Loss (EP&L) account, but this kind of reporting remains very much the exception. Novo Nordisk’s is the first EP&L to emerge since Puma published the original EP&L account way back in 2011. We will see more EP&L accounts by 2016 as Kering will publish accounts for all of the group’s luxury and sports brands.

The TEEB for Business Coalition, an associate partner for the World Forum, has undergone a rebrand after a public consultation to emerge as the Natural Capital Coalition reaffirming the interest in the term natural capital. At the end of November they, along with the International Finance Corporation (IFC), launched the Natural Capital Protocol a project to develop a harmonised framework for valuing natural capital in business and investor decision making.

The Natural Capital Protocol reflects the desire for standardisation that exists because with tools and methodologies existing from the likes of Trucost, True Price, PwC and Gist it can be daunting for companies at this stage to know where to look when they decide to proceed with natural capital accounting.

On the reporting side a development of note occurred in February when the Climate Disclosure Standards Board (CDSB) opened a consultation inviting public comment on the expansion of its global corporate reporting framework beyond climate change to include natural capital information. The expanded Framework is designed to help organisations prepare and present environmental information in mainstream reports for the benefit of investors, the inclusion of natural capital in this framework is an important step.

In January The Economics of Ecosystems and Biodiversity (TEEB), the project from which the Natural Capital Coalition emerged, organised a scoping workshop for the ‘TEEB for Agriculture & Food’ study to draw input from several experts for a future study. The Agriculture & Food study builds on the TEEB approach to draw attention to the economic benefits of ecosystems services to agricultural systems.

There are a number of countries in which natural capital has been gaining increasing prominence in these last months. In February Japan’s Ministry of the Environment alongside Conservation International held the ‘International Symposium on Natural Capital Management’ which featured speakers including Pavan Sukhdev and the Programme Director of the World Forum on Natural Capital, Jonathan Hughes.

Another point of interest coming out of Japan is the work of Sumitomo Mitsui Trust, the first company in the world to be incorporating natural capital evaluation in loan criteria. They are the first but with the existence of the Natural Capital Declaration it is surely only a matter of time until others follow suit.

Across the Pacific from Japan in Costa Rica a law to incorporate the value of natural capital in development planning was introduced into the legislature in late November. If passed, the Government and the private sector would need to incorporate relevant natural capital data and its economic importance into proposed project plans.

From Costa Rica our journey takes us across the Atlantic back to Scotland, the host country for the World Forum, which has demonstrated leadership on natural capital over the last 100 days through the Scottish Forum on Natural Capital. This groundbreaking initiative, bringing together public, private and voluntary sector organisations to protect and rebuild Scotland’s natural capital, was launched at the World Forum with support from Scotland’s First Minister Alex Salmond.

The Scottish Forum’s first members’ meeting at the end of February saw members sign up from public, private and voluntary organisations. The list of initial members includes the Scottish Government, the RBS Group, the University of Edinburgh, ICAS and Scottish Environment LINK (a coalition of Scotland’s leading environmental NGOs). The Scottish Forum will look to create cross-sector collaborations to work for the benefit of Scotland’s natural capital.

With research carried out on behalf of the Scottish Environmental Protection Agency estimating that nature  is worth at least £21 billion to Scotland’s economy there is a clear incentive for a concerted effort to ensure that it is well managed. Within the Scottish Government itself there has been a Natural Capital group established with its first meeting taking place next week.

So, did I miss anything? What have you been doing these past 100 days? I’d love to hear about what I may have missed, and who knows maybe it will feature at the next World Forum. It has been an undeniably exciting 100 days , with plenty of encouraging developments and it will be interesting to see how these turn into action before the next World Forum in November 2015. But these are just the start, and now we need to move forward quickly as the rate of environmental decline is alarming. Natural Capital accounting has real potential to move us towards a situation where all sectors of society, whether private, public or voluntary, recognise the benefits that we derive from nature and take action to protect and restore it.

The next World Forum on Natural Capital will take place in Edinburgh, Scotland on 26-27 November 2015.

Chasing Unicorns: Embracing Financial Models Where Everyone Can Win